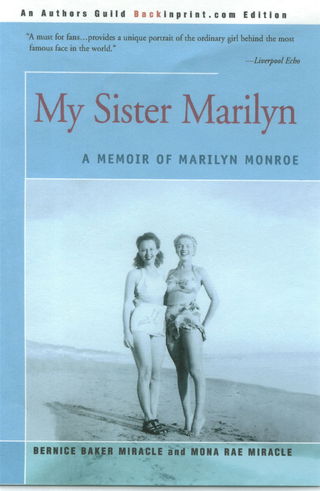 
I remember waiting at the train station in Detroit for Marilyn to appear that first time — of course, then she was still Norma Jeane. We had been writing to each other over the years and had exchanged pictures, but we had never met face to face. She’d told me she’d be wearing a cobalt blue suit and a hat with a heart-shaped brim, but I worried that I wouldn’t recognize her when she stepped off the train.

There was no missing her! She stood out immediately from all the rest of the passengers, so tall and pretty and fresh. We were excited to finally meet, and we couldn’t stop staring at each other. We had the same dark blond hair with a widows’ peak, the same mouth, but our eyes were different—mine are brown and Norma Jeane’s were blue like our mother’s. I was so happy to have a sister. And so proud.

But when I was growing up I didn’t even know if my mother was still alive. And I didn’t find out about Norma Jeane until she was twelve and I was nineteen.

Four-year-old Berniece Baker clutches the cold steel rail of the bridge. The wind flails strands of her blond hair against her face like tiny whips. She squints her eyelids against the wind and watches the two women nearby. One is her stepmother. One is her mother by blood.

The stepmother, bony and dark-haired, leans with the stiffness of middle age. The wind blows her straight-cut bangs away from her forehead, revealing deep frown lines. At twenty-three, the other woman has the unlined face of a girl. The animation of her petite body matches the erratic energy of the wind, The child watches this young flaxen-haired stranger gesture angrily and turn on her heel. Her shoulders grow smaller and disappear below the crest of the bridge.

The gaunt older woman turns and stoops, folding her arms about the child for a long moment. She takes the child’s hand, and together they tread across the rough planks of the bridge, their shoes making faint hollow taps, the taps carried away by the wind.

Gladys Monroe Baker, the young fair-haired stranger, disappears just as mysteriously as she had appeared in the lives of her ex-husband Jasper Baker, her daughter Berniece, her son Jackie, and Jasper’s wife Maggie. As time passes, year after year without a word, the family will wonder if she is still alive. But Gladys’s incredible energy and anger simply propel her from Kentucky back to California with a determination to resume her life there anew.

At the film lab where she works, Gladys meets a co-worker with whom she has much in common. Grace Atchinson McKee, age twenty-nine, is also divorced, also a film cutter. The two become best friends and roommates. Their arrangement lasts until Gladys, at the urging of her mother, accepts the proposal of Edward Mortensen. They are married on October 11, 1924. On the marriage certificate, Edward lists his name as Martin E. Mortensen; his age as twenty-seven; his occupation, meterman; his birthplace, California; his marital status, divorced. Gladys lists her age as twenty-two, although she is actually twenty-four.

On May 27, 1926, Gladys’s mother Della (widowed in 1909 when Gladys’s father, Otis Elmer Monroe died, and now married to Charles Grainger), dispatches a picture postcard to Kentucky from Borneo, where her engineer husband is on assignment. Addressing that card to Berniece, and evidently unaware that Gladys had broken contact with the child, Della writes:

Dear little Berniece, This is the kind of big snakes they have here. They are big enough they could swallow you and Jackie and so could the alligators. They have lots of fun here hunting them. This is your mother’s birthday. Do you and Jackie ever write to her, write to me. Your Grand Mother Mrs. Chas. Grainger

Five days later on June 1, Gladys gives birth to her second daughter, Norma Jeane Mortenson. (Though Gladys’s husband’s name appears as “Mortensen” on their marriage certificate, on Norma Jeane’s birth certificate the spelling has changed slightly.) On the birth certificate, Gladys indicates that this is her third child but falsely states that it is the only living one. “Mortenson’s” address is listed as unknown, his occupation as that of baker. He has left Gladys before the birth and disappeared.

Gladys is completely without means. Norma Jeane was born in a charity ward, and Gladys must find someone to care for her infant daughter so she can return to work. Della’s neighbors in nearby Hawthorne, California, agree to board Norma Jeane. Gladys pays Albert Wayne Bolender and his wife Ida twenty-five dollars a month.

Gladys visits Norma Jeane on weekends and takes her for outings, including sleepovers at her apartment in Los Angeles. When Della returns to Hawthorne, ill with malaria, often delirious, suffering fevers and delusions, she is unable to care for Norma Jeane. So the boarding arrangement continues. Norma Jeane is fourteen months old when Della dies at age fifty-one in August 1927. Gladys handles the details and expenses of Della’s funeral, placing Della’s grave alongside that of her first husband.

Norma Jeane begins kindergarten at Washington Avenue School in Hawthorne. Her closest companion is Lester, a foster child of the Bolenders, whom they eventually adopt. Norma Jeane is healthy, strong, athletic, and keeps pace with Lester in their backyard contests. As she builds memories, she banks the fond affection of the Bollenders, the delight she feels wearing the fancy dresses that Ida sews for her, and a sense of accomplishment as she takes piano lessons. Her lifelong love of animals begins with her mutt Tippy. She suffers terrible grief when Tippy is shot by a neighbor.

In the fall of 1933, Gladys realizes a dream she has worked toward with endless overtime hours. After scrimping for seven years, she has finally saved enough money for a down payment on a home for herself and Norma Jeane, a two-story house near the Hollywood Bowl. To help meet expenses, she rents rooms to a British couple and their grown daughter, all movie stand-ins. Norma Jeane, who is seven, now transfers to Selma Avenue School. Gladys’s special gift to Norma Jeane is a piano to call her very own, a black Franklin grand, once owned by Frederic March.

Gladys’s friend Grace McKee advises Gladys not to buy the house because their future at the film lab is insecure. And Grace’s forebodings are borne out. Recent years have been stressful for Gladys — divorce, desertion, the death of her mother, separation from two of her children, the frustration of dead-end dating, the toll of working overtime, and now a strike at her company just when she has taken on the huge financial obligation of a home. The accumulated stress results in a breakdown.

Gladys must be hospitalized and is diagnosed as suffering from paranoid schizophrenia. Grace takes responsibility for handling Gladys’s affairs, becoming guardian for both Gladys and Norma Jeane. Grace’s sister and brother-in-law, Enid and Sam Knebelkamp, and her aunt Ana Lower help care for Norma Jeane. Gladys’s house is sold and the furniture auctioned off, but Ana Lower buys Norma Jeane’s piano to hold in safekeeping for her.

Grace is responsible for handling Gladys’s company insurance money, and, as Gladys’s illness continues beyond the term of coverage, Grace must transfer her from the hospital to a state institution. It becomes apparent that Gladys is not going to recover in the near future, making it necessary for Grace to place Norma Jeane in the Los Angeles County Children’s Home. Grace promises to honor Gladys’s plea that Norma Jeane neither be adopted nor taken out of the state of California.

When nine-year-old Norma Jeane moves to the children’s home on September 13, 1935, she must once again transfer to a new school, this time Vine Elementary. Norma Jeane remains at the children’s home until Grace’s circumstances improve. She leaves on June 26, 1937, at the age of eleven, to live in the home of “Aunt” Grace and her new husband Erwin C. Goddard. “Doc” Goddard is an engineer and amateur inventor. He is divorced, with custody of his three young children. Norma Jeane’s “siblings” now include Doc’s daughter Bebe, age nine; son “Fritz” (John), age seven; and a daughter Josephine, age five. A family of Persian cats and a spaniel round out the large, active household. Norma Jeane attends Sawtelle Elementary, and then Emerson Junior High School.

The echo of staccato, syncopated taps fills the cavernous three story stairwell. Blond-haired sixteen-year-old Berniece Baker clatters down the steps of Pineville High School in Kentucky, improvising a tap dance. Below, her audience leaps and shrieks. Niobe Miracle and two other friends are enthusiastic and raucous.

Berniece lands in a split at the bottom of the stairs. The girls clap wildly. Berniece grins, breathless. They haul her up, laughing, and bounce together through the open back doors, not really worried that the principal may be striding down the corridor to investigate this explosion a half hour after school has been dismissed. The principal has heard this noise before. In the spring, she will smile to find the thundering energy transformed into a song-and-dance routine performed to the popular tune “College Rhythm.”

I won First Prize in the talent show that year. I wore black slacks and a white satin blouse, copied from a movie I had seen. I didn’t stick to the steps I had been rehearsing, but it was pretty good, and the audience loved it. I was thrilled with my five dollars prize money. I thought it was a fortune! So did everybody else in 1935.

“College Rhythm” tinkles out of radios from coast to coast. Three thousand miles away another slim blond girl, this one just eleven years old but equally interested in music and mirrors, is groping through some confusing times after her move from an orphanage in Los Angeles to the home of her mother’s best friend Grace and Grace’s new husband. Norma Jeane finds that listening to music lifts her spirits. Hearing tunes spun by the disc jockeys over and over again gives a pattern to her days, a pleasant order and familiarity.

She wonders if she will be allowed to resume the piano lessons that stopped abruptly when her mother became ill. It would be nice to get beyond the keyboard exercise books and play something like the popular tunes on the radio. Like “College Rhythm.”

Going to the movies on Saturdays becomes Norma Jeane’s favorite pastime and, as she enters adolescence, fantasy life fills her private moments. She experiments with makeup for hours, and she acts out roles she has seen in films. Yet she has more success at school with athletics than with acting. Norma Jeane wins a track medal but is not cast in a play, although she does perform in a talent show.

Paris Miracle and Berniece escape the monotony of school one rainy day, squeezing into the back seat with a carful of noontime hamburger stand seekers. “I have a ring for you,” whispers Paris. A tiny blue box materializes. Paris opens it, slips out a solitaire, and twists it onto Berniece’s finger. Berniece’s reply is lost among the screams of the car’s teenagers, as the driver makes a 360-degree skid on the rain-slick mountain road.

Back at school, Paris’s sister Niobe attempts to scratch the window of their home economics classroom to discover if Berniece’s ring is a genuine diamond.

When Norma Jeane has lived a year and a half with the Goddards, Gladys’s condition begins to improve. She shows some interest in the outside world and begins a fragile renewal of goals. Gladys’s first goal is to reestablish contact with Berniece and to encourage her to correspond with Norma Jeane. A dramatic new element will be added to Norma Jeane’s life, one that will enchant her as a blend of reality and fantasy. Gladys has asked Grace to reveal to Norma Jeane that she has a sister.